Anthrax is an acute bacterial infection caused by an organism called Bacillus anthracis. It is mainly a disease of herbivorous animals.

Humans become infected when spores of B. anthracis are introduced into the body by:

In human beings the most common form of this infection is Cutaneous Anthrax. It is characterized as a localized skin lesion with a central eschar surrounded by marked edema or swelling.

Other forms are more dangerous – 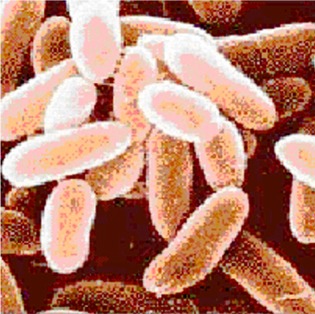 Gastrointestinal Anthrax is rare and is also associated with a high mortality rate.

Approximately 95 percent of human cases of anthrax are the cutaneous form and about 5 percent the inhalation form. Gastrointestinal anthrax is rare. Anthrax meningitis occurs in a small percentage of all cases and is a frequent complication of overwhelming infection with B. anthracis and this is also associated with a high mortality rate.

Cutaneous anthrax is caused when spores of B. anthracis are introduced into the skin through cuts or abrasions or by biting flies. The spores germinate within hours, and the vegetative cells multiply and produce anthrax toxin. These lesions are more often found on the exposed areas of the body.

Within days a small red macule appears. During the next week, the lesion progresses through papular and vesicular or pustular stages to the formation of an ulcer with a blackened necrotic eschar surrounded by a zone of brawny edema. There may be itching in the early lesion and the fully developed lesion is painless. 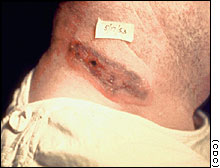 Small satellite vesicles may surround the original lesion, and painful regional lymph nodes may be present. Most patients do not have fever and may have no constitutional symptoms. In severe cases, the edema may be extensive and associated with shock. Spontaneous healing occurs in 80 to 90 percent of untreated cases, but edema may persist for weeks. In the 10 to 20 percent of untreated patients who have progressive infection, bacteremia develops and is often associated with high fever and rapid death.

Other conditions that may be confused with this disease are staphylococcal skin infections, tularemia, plague.

Cutaneous anthrax should be considered when patients have painless ulcers associated with and edema and have had contact with animals or animal products.

In this form of the disease the spores of the B.anthracis are deposited directly in to the alveoli of the lungs. B. anthracis spores as airborne particles 5 um in diameter need to be deposited directly into the alveoli or alveolar ducts ( the remote location in the lung ) of the lungs. From here the spores are taken up by the phagocytes and carried to the mediastenal nodes where they germinate. Hemorrhagic mediastinitis takes place with necrosis of the nodes. Infection rapidly spreads leading to death.

Clinical presentation of the patient is similar to severe acute viral respiratory infection and diagnosis at early stage is difficult.  After 1 to 3 days, there is increasing fever, dyspnea, stridor, hypoxia, and hypotension usually leading to death within 24 h.

Gastrointestinal anthrax usually results from ingestion of inadequately cooked meat from animals with anthrax. Primary lesion can be in the intestines or it may be oral and pharynx or at the tonsils.

Symptoms may be fever, nausea and vomiting, abdominal pain, bloody diarrhea, and sometimes rapidly developing ascites. Sore throat and dysphagia may be present in case of lesions in the throat.

Bacillus.anthracis is highly sensitive to penicillin. Ciprofloxacin is also drug of choice.

Inhalation anthrax was essentially eliminated in England before 1940 through the development of methods to decontaminate wool and goat’s hair and the improvement of working conditions for handlers of animal products.

Non living vaccine  are used in the United Kingdom and the United States for the immunization of agricultural workers, veterinary personnel, and others at risk of exposure to anthrax.

Live attenuated vaccines containing spores of B. anthracis are used in both developed and developing countries to immunize domestic herbivores animals. These preparations are also used to immunize humans in Russia but not in the United States.

Improved anthrax vaccines for humans are needed. . In addition to agricultural and industrial anthrax, the possible use of B. anthracis as an agent of biological warfare is a stimulus for the development of an improved vaccine. Carcasses of animals that die due to anthrax should be buried intact or cremated. Butchering of infected animals should be avoided.