All of us gradually slow down both physically and mentally with the passage of time as we get older.

There is a difference between occasional forgetfulness and many diseases which are cause of Dementia. Some indications are helpful in differentiating the conditions.

Dementia is a clinical syndrome characterized by loss of previously acquired intellectual functions in the absence of impairment of consciousness.

The term dementia is mostly associated with elderly but some disorders occur in the mid life which have Dementia as a prominent feature. Such diseases are also collectively called Pre-senile Dementia and these diseases also have a strong familial disposition.

Judgment and problem solving ability is reduced. Thinking is slow.

Minor degree of memory impairment is often the first sign of this disease. Forgetfulness in relation to day to day work and concerning personal possessions is prominent. People’s names are forgotten, appointments are missed. Declining memory may lead to secondary delusions. 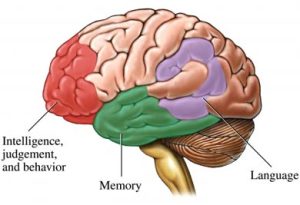 Decline in personal manner and social awareness. Behavior may become rude, tactless, and may be insensitive to feeling of others. Episodes of aggression, sexual indiscretion or even infringement of law may be seen. Deterioration in personal hygiene, urinary and fecal incontinence are common. General decline in interest of the surroundings. Patient may sit for hours without initiating any purposeful activity.

Emotional changes: Mood changes, depression, anxiety, irritability may be prominent in the early stages. In advanced dementia the emotional reaction may be blunted and patients becomes incapable of responding to emotionally charged events in their environment.

Things to look for:

Talking to the person and taking detailed history helps in differentiating and diagnosing the cause of dementia.

Drugs for Cognitive and functional impairments in Dementia

Piracetam – a metabolic enhancing agent of the brain.
Selgilne- a MAOinhibitor, which is used in Parkinson’s disease is also useful in Alzheimer’s disease.
Aspirin and Other Anti inflammatory agents (NSAIDS) have also been shown to slow down the process of dementia.
Oestrogen replacement therapy may be helpful in postmenopausal women with dementia.
Ginkgo biloba
Brahmi
Ashwagandha
Researchers found that taking vitamins C and E might help protect the aging
mind from decline in cognitive function, and some kinds of dementia.