Among the rarest people in the world are those with progeria, or accelerated aging disease. While leaving intelligence intact, progeria ages the body many times faster than normal, leaving teens with frail bodies of people nearing 100 years old. 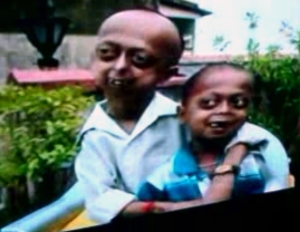 First described by Dr. Jonathan Hutchinson in 1886 and Dr. Hastings Gilford in 1904.

Also known as Hutchinson-Gilford Progeria Syndrome is an extremely rare genetic disease. In this disease the aging process of the body accelerates much faster than what it does in normal humans. This process of aging gallops to about seven times the normal rate. Because of this accelerated aging, a child of ten years would have a look of 70 years old. He or she may also have similar respiratory, cardiovascular, and arthritic conditions that a 70-year-old would have.

There is no cure for this disease. The exact cause is unknown, but it is believed due to a single abnormal (mutant) gene. Normally for each gene there are two copies, one from each parent. Progeria is considered to be the result of a dominant mutation because the gene in question has one normal copy and one abnormal copy, as opposed to a recessive mutation in which both copies are abnormal. Because neither parent carries or expresses the mutation, each case is believed to represent a sporadic new mutation which happens at the time of conception. 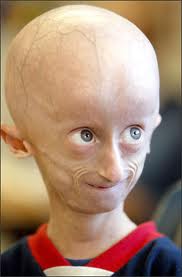 Progeria affects between 1 in 8 million (approx.) children, with a total reported incidence of just over 100 in the century since it’s been identified. There are currently between 30 and 40 known cases worldwide of Progeria. Children from all races and cultures from around the world have been affected.

Because of the lack of a specific laboratory test at this time, the diagnosis must be based on the physical appearance of the individual. The diagnosis is usually made in the first or second year of life when skin changes and failure to gain weight become apparent.

Research indicates that a chemical (hyaluronic acid) may be found in greatly elevated levels in the urine of Hutchinson-Gilford Progeria Syndrome patients. The same abnormality has been found in Werner Syndrome, which is sometimes called ‘progeria of the adult’.