In 1676, Antonie Philips van Leeuwenhoek (1632-1723), lay the foundation of knowledge of Protozoa and Bacteria by using home made microscope. He was basically a trader of fabric, a dutch businessman, scientist, and one of the notable representatives of the Golden Age of Dutch science and technology. 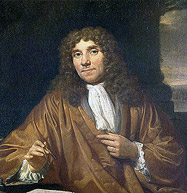 In a letter sent to the Royal Society of London for Improving Knowledge in 1676 by Antony van Leeuwenhoek (1632-1723), he wrote:

“These little animals to my eye were more than ten thousand times smaller than…the water flea or water-louse, which you can see and moving in water with the bare eye.”

He described round and spiral shaped bacteria.