Human cysticercosis is infection by the larval (cysticercus) stage of the

The natural history of the infection is incompletely known. Cysticerci complete their development within 2-4 months after larval entry and live for months to years. 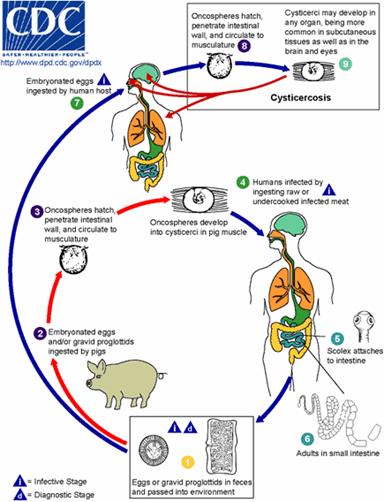 Several factors give rise to symptoms. Initially, the live larva within a thin- walled cyst (vesicular cyst) is minimally antigenic.

When the host immune response or chemotherapy results in gradual death of the cyst, there may be cyst enlargement (colloidal cyst) with mechanical compression, inflammation with pericyst edema, and (sometimes) vasculitis that can result in small cerebral infarcts, increased intracranial pressure. Subsequently, as the cyst degenerates over 2-7 years, it may disappear or be replaced by a granuloma, calcification, or residual fibrosis.

Cysts at different life cycle stages-active (live), transitional, and inactive (dead)-may be present in the same organ. Although some patients develop an intense immune response to the parasite, others show a remarkable tolerance.

Locations of cysts in order of frequency are:

Cysts reach 5-10 mm in soft tissues but may be larger (up to 5 cm) in the central nervous system. Attached to the inner wall of the cyst is an invaginated protoscolex with four suckers and a crown of hooks.

In many patients, cysts remain asymptomatic. When symptomatic, the incubation period is highly variable (usually from 1 to 5 years but sometimes shorter). Manifestations are due to mass effect, inflammatory response, or obstruction of the brain foramina and ventricular systems. Neurologic findings are varied and 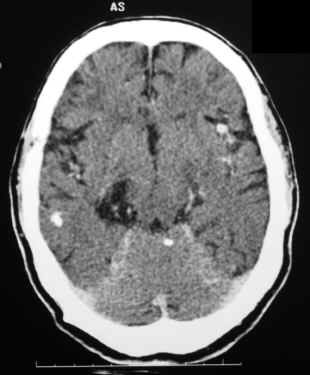 nonspecific, in large part determined by the number and location of the cysts.

Parenchymal cysts: Cysticerci can present singly or multiple and may be scattered or in clumps. Findings include epilepsy (focal or generalized), focal neurologic deficits, intracranial hypertension (intense headache, vomiting, papilledema, visual loss), and altered mental status. Seizures usually do not occur until the cyst or cysts have begun to die.

Subarachnoid space cysts and meningeal cysts: Small to large cysts are generally located in the cortical sulei or basal cisterns. The arachnoid is the principal basal membrane affected. Adhesive arachnoiditis may result in obstructive hydrocephalus, intracranial hypertension, arterial thrombosis leading to transient ischemia or stroke, and cranial nerve dysfunction (most often of the optic nerve).

Ventricular cysts: may float freely (usually singly) within the ventricles or cerebral aqueduct or may be attached to the ventricular wall. They are usually asymptomatic but can cause increased intracranial pressure as a result of intermittent or total blockage.

Racemose cysts: are rare aberrant forms that are multiple-branched, nonencysted, and lack a scolex; they present as grape-like irregular clusters and may reach over 10 cm in diameter. They generally are found in the ventricular and basal subarachnoid spaces, where they cause marked adhesive arachnoiditis and often-obstructive hydrocephalus.

Spinal cord cysts: can be extraspinal or intraspinal and cause arachnoiditis (meningitis, radiculopathy) or pressure symptoms.

Usually there is a single cyst, free-floating in the vitreous or under the retina. Presenting symptoms include periorbital pain, scotomas, and progressive deterioration ofvisual acuity. Findings may include disk hemorrhage and edema, retinal detachment, iridocyclitis, and chorioretinitis. MRI but not CT may assist in diagnosis; immunologic tests are negative.

Subcutaneous cysts present as nodules that tend to appear collapse and disappear, and then reappear in other sites after variable periods of time. They are usually asymptomatic.

Appearance  of subcutaneous nodules when associated with other symptoms, for example episodes of seizures, help in diagnosing the condition of cerebral cystecercosis.

Definitive diagnosis of Neurocysticercosis requires finding the parasite on histological section of specimens removed by excision biopsy of skin or subcutaneous. Patients should be thoroughly examined by palpation for pea-sized nodules.

Plain radiographs of muscle may detect oval or linear calcified lesions (4-10 X 2-5 mm). The lesions are usually multiple, sometimes in the hundreds, and the long axis of the cysts are nearly always in the plane of the surrounding muscle fibers.

Immunoelectrotransfer blot test appears to reach nearly 100% specificity and 95% sensitivity (sensitivity appears to decline if only one or two cysts are present).

Patients presenting with only calcified lesions or granulomas are generally serologically negative.

, whereas the ELISA showed. respectively, 63% and 65%. Hydatid disease and H nana infections cross- react in the ELISA. Sensitivity using cerebrospinal fluid was 86% by immunoblot and 62% by ELISA..

Other tests: The cerebrospinal fluid in neurocysticercosis should be evaluated for IgM (by ELISA) and IgG antibody.  The fluid typically shows increased protein, decreased glucose, and a cellular reaction of mainly lymphocytes and eosinophils.  Eosinophilia over 20% is diagnostically important. EEG may be abnormal.

Medical treatment is with Albendazole (preferred) or Praziquantel. Albendazole is more effective, and when corticosteroids are given concurrently, the plasma level of albendazole increases but that of praziquantel decreases.

Treatment should be conducted in hospital. In less than a week after starting treatment, inflammatory reactions around dying parasites may be manifested by meningismus, headache, vomiting, hyperthermia, mental changes, and convulsions. It remains controversial whether to give steroids concomitantly to avoid or diminish this reaction. Anticonvulsants must be continued during drug treatment and probably for an indefinite time afterward.

Following treatment, 50% cure rates (disappearance of cysts and clearing of symptoms) have been reported both for albendazole and praziquantel. Of the remaining patients, many have amelioration of symptoms, including intracranial hypertension and seizures.

In ocular cysticercosis, treatment with albendazole plus corticosteroids kills the cysts, reducing subretinal cysts to a small scar and allowing for easy extraction of vitreous cysts.

Albendazole: A dosage of 15 mg/kg/d in divided doses with meals for 8 days is as effective as the former 30- day course. Albendazole should be taken with a fatty meal to increase absorption.

Praziguantel: Give 50 mg/kg/d for 15 days in three divided doses. Phenytoin, phenobarbital, and corticosteroids, when administered with praziquantel, reduce serum levels of the latter; high doses of praziquantel have been tried in these circumstances.

Surgery:  May be needed to remove orbital, cistemal, and ventricular cysts and, if accessible, cerebral, meningeal, or spinal cord cysts. When hydrocephalus is present, surgical shunt is required even when the parasites have been destroyed.

The fatality rate for untreated neurocysticercosis is about 50%; survival time from onset of symptoms ranges from days to many years. Drug treatment has reduced the mortality rate to about 5-15%. Surgical procedures to relieve intracranial hypertension along with use of steroids to reduce edema improve the prognosis for those not effectively treated with the drugs.