Botulism is a disease that occasionally strikes people who eat badly canned food or fish in which the bacteria has grown. The bacteria for botulism are also found in soil. The bacteria produce an extremely toxic substance, botulinum that causes blurred vision, dry mouth, difficulty in swallowing or speaking, weakness, paralysis, respiratory

The organism causing this disease is Clostridium botulinum. 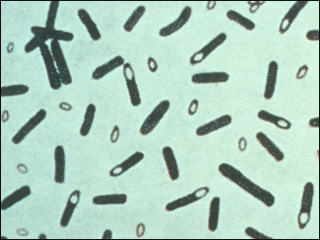 The disease may be classified as

C. botulinum, is a group of anaerobic gram-positive organisms that form spores, is found in soil and marine environments throughout the world and produces the most potent bacterial toxin known. These are all neurotoxins.

After ingestion of food containing toxin, the illness may be a mild condition for which no medical advice is sought or it may also be a very severe disease that can result in death within 24 h. The onset of symptoms is with Cranial nerve involvement, which produces

Weakness progresses, often rapidly, from the head to involve the neck, arms, thorax, and legs. The weakness is mostly symmetrical but may occasionally be asymmetric. Nausea, vomiting, and abdominal pain may precede or follow the onset of paralysis.

Patients are generally alert and oriented, but they may be drowsy, agitated.

Ptosis (drooping of eyelids) is frequent. Fixed or dilated pupils are noted in half of patients.

Paralytic ileus, severe constipation, and urinary retention may be present.

When wounds are contaminated with C. botulinum spores, the spores may germinate into vegetative organisms that produce toxin. This rare condition resembles food-borne illness except that the incubation period is longer, averaging about 10 days, and gastrointestinal symptoms are lacking. Wound botulism has been seen after traumatic injury involving contamination with soil, in chronic drug abusers, and after cesarean delivery. The illness has occurred even after antibiotics have been given to prevent wound infection. The wound may appear benign.

In infant botulism the most common form of the disease the Toxin is produced in and absorbed from the intestine after the germination of ingested spores. The severity ranges from mild illness with failure to thrive to fulminant severe paralysis with respiratory failure and may be one cause of sudden infant death. Contamination of honey with spores has been found to be one of the causes. This has led to the recommendation that honey not be fed to children less than 12 months of age. Most cases cannot be attributed to a particular food source. Cases usually involve infants less than 6 months of age.

There is another group in which the disease resembles the infant botulism in that the  toxin is produced in the intestine of a person colonized with the organism. In such cases the toxin and the spores may be found in the stool for a prolonged period. Gastrointestinal disease or surgery may predispose to such an illness.

A diagnosis of botulism is suspected in a person a febrile ( no fever ), mentally intact patients who have symmetric descending paralysis without sensory findings.

Conditions often confused with botulism include myasthenia gravis and Guillain-Barre syndrome, which is characterized by ascending paralysis, sensory abnormalities, and elevation of the protein concentration in cerebrospinal fluid. Other conditions resembling botulism are Lambert-Eaton syndrome, poliomyelitis, tick paralysis, diphtheria, and intoxications from mushrooms, medications, or chemicals.

Mortality in botulism is higher among patients above age 60 than among younger patients. With improved respiratory and intensive care, the case-fatality rate in food-borne illness has been reduced.

Botulinum toxin is being used as therapy for strabismus, blepharospasm, and other dystonias.