Haemophilia A is a genetic disorder characterised by defficiency of Factor VIII in the blood. The factor VIII gene is located on the X chromosome . Thus this disorder is a sex linked disorder. 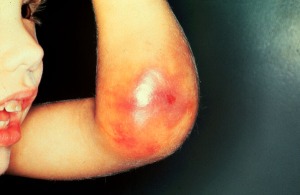 Hemophilia B is similar to Hemophilia A. Both are abnormality of blood coagulation. Hemophilia B is caused by the deficiency of Factor IX. It is also known as Christmas disease. It occurs in 1 in 100,000 male births. It has to be diagnosed accurately because clinically it is indistinguishable from factor VIII deficiency – Hemophilia A.

Factor IX is one of a group of six proteins synthesized in the liver that require vitamin K for biologic activity.

Treatment of Haemophilia A

Plasma products enriched in factor VIII have revolutionized the care of hemophilia patients, reduced the degree of orthopedic deformity, and permitted virtually any form of elective and emergency surgery. Now this mode of treatment is being widely used.

The widespread use of factor VIII concentrates also has produced some serious complications, including viral hepatitis, chronic liver disease, and AIDS.

Cryoprecipitate, which contains about half the factor VIII activity of fresh frozen plasma in one-tenth the original volume, is simple to prepare and is produced in hospital or regional blood banks. It must be stored frozen and is thawed and pooled before administration. Partially purified factor VIII concentrate, which is prepared from multiple donors and supplied as a lyophilized powder, can be refrigerated and reconstituted just before use.

Patients with hemophilia should receive either monoclonal purified or recombinant factor VIII to minimize viral infections and other complications.

It has been determined empirically that each unit of factor VIII infused, defined as the amount present in 1 ml normal plasma, will raise the plasma level of the recipient by 2 percent per kilogram of body weight. Factor VIII has a half-life of 8 to 12 h, making it necessary to infuse it continuously or at least twice daily to sustain a chosen factor VIII level. In patients with mild hemophilia, an alternative to the use of plasma products is desmopressin (DDAVP), which transiently increases the factor VIII level. Desmopressin, in general, will increase the factor level two- to threefold. Although generally safe, it occasionally causes hyponatremia or may precipitate thrombosis in elderly patients.

Most hemophiliac patients have had multiple episodes of hepatitis, and a majority have elevated hepatocellular enzyme levels and abnormalities on liver biopsy. Between 10 and 20 percent of patients also have hepatosplenomegaly, and a small number develop chronic active or persistent hepatitis or cirrhosis. A few patients with hemophilia have received liver transplants with cure of both diseases.

Following multiple transfusions, between 10 and 20 percent of patients with severe hemophilia develop inhibitors to factor VIII. Inhibitors are, generally, IgG antibodies that rapidly neutralize factor VIII activity. Before surgery, every patient should be screened for the presence of an inhibitor to factor VIII.

Female carriers of hemophilia, who are heterozygotes, usually produce sufficient factor VIII from the factor VIII allele on their normal X chromosome for normal hemostasis. However, occasional hemophilia carriers will have factor VIII levels far below 50 percent due to random inactivation of normal X chromosomes in tissue producing factor VIII. These symptomatic carriers may bleed with major surgery or bleed occasionally with menses. Rarely, true female hemophiliacs arise from consanguinity within families with hemophilia or from concomitant Turner’s syndrome or XO mosaicism in a carrier female.