Whether or not a specific trait or disorder is inherited is determined by hereditary material called “genes.” Genes are the units of hereditary material. They contain coded instructions which direct the development of every cell and tissue in the human body. You might think of genes as blueprints, specifying how the body will develop and function. 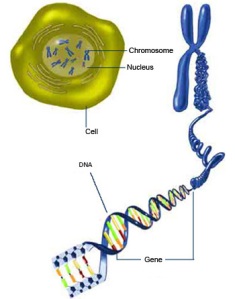 A gene is a stretch of DNA that tells a cell how to make a protein. Each amino acid is coded for by a three-letter sequence. The cell machinery reads this code, grabs the appropriate amino acids, and strings them together to make a protein. Most researchers believe we have around 100 000 genes.

The human genome comes in 23 pieces, packaged in proteins to form chromosomes. Our cells have two copies of each chromosome–one from each parent–making 46 in all. The 23rd pair consists of the sex chromosomes.

Most often, genes produce normal traits. Sometimes, however, a gene becomes altered from its original form. A gene that is thus changed is called a “mutant” gene. Although researchers know that mutations occur, the reasons for their occurrence is not completely understood. Some mutations are not harmful, but most often a mutant gene functions improperly and causes a disorder, malfunction, or malformation within the body. Mutations can occur in any generation. If a spontaneous mutation occurs, it is then possible for a child to be the first family member to get a genetic disorder such as Marfan syndrome, even though both parents are normal.

A mutation is a misspelling in the code for a protein that can be passed from one generation to the next–an A instead of a G, say. The result can be a disease, such as cystic fibrosis.

In addition to mutations, the “inheritance pattern” or the way in which genetic traits or disorders are expressed also varies. The Marfan syndrome follows a pattern of inheritance called “autosomal dominant inheritance.” “Autosomal” means the inheritance is linked to any chromosome other than those which determine the sex of the child. “Dominant” means the effects of the Marfan gene dominate or override the effects of the normal gene in the pair. Therefore, if one parent contributes the Marfan gene and one parent contributes a normal gene, the child will inherit the Marfan disorder. There is a 50% chance during each pregnancy that the affected parent will pass on the Marfan gene and the child will get the Marfan syndrome. There is, of course, also a 50% chance that the affected parent will pass on his or her normal gene, in which case the child will not get the disorder.

It is important to remember that parents have no control over which genes they pass on to their children, and, therefore, should not feel at fault if one of their children inherits a disorder such as the Marfan syndrome.