It is one of the most frequently occurring chromosomal abnormalities found in humans, occurring once in approximately every 800 to 1,000 live births.
John Langdon Down, an English physician, published an accurate description of a person with Down syndrome. It was this scholarly work, published in 1866, which earned Down the recognition as the “father” of the syndrome. Although other people had previously recognized the characteristics of the syndrome, it was Down who described the condition as a distinct and separate entity.
In 1959, the French physician, Jerome Lejeune, identified Down syndrome as a chromosomal anomaly. Instead of the usual 46 chromosomes present in each cell, Lejeune observed 47 in the cells of individuals with Down syndrome. 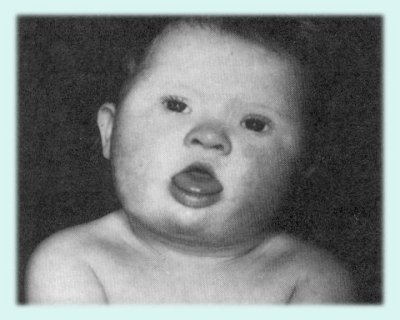 The diagnosis of Down syndrome is usually suspected after birth as a result of the baby’s appearance.

There are many physical characteristics which form the basis for suspecting an infant has Down syndrome. If Down syndrome is suspected, a karyotype will be performed to ascertain the diagnosis. Some infants with Down syndrome have only a few of these traits, while others have many.

Among the most common traits are:

All people with Down syndrome have some level of mental retardation. however, the level usually falls into the mild to moderate range .Children with Down syndrome learn to sit, walk, talk, play, toilet train and do most other activities, only somewhat later than others. Speech is often delayed.

Children with Down syndrome are at increased risk for certain health problems. Congenital heart defects, increased susceptibility to infection, respiratory problems, obstructed digestive tracts and childhood leukemia occur with greater frequency among children who have Down syndrome. However, advances in medicine have rendered most of these health problems treatable, and the majority of people born with Down syndrome today have a life expectancy of approximately fifty-five years.

Leukemia – Individuals with Down syndrome have a 15 to 20 times greater risk of developing leukemia. The majority of cases are categorized as acute megakaryoblastic leukemia, which tends to occur in the first three years of life, and for which there is a high cure rate. A transient form of leukemia is also seen in newborns with Down syndrome, disappearing spontaneously during the first two to three months of life.

Screening tests for Down syndrome

The most commonly used screening tests are the Triple Screen and the Alpha-fetoprotein Plus. These tests measure quantities of various substances in the blood (alpha-fetoprotein, human chorionic gonadotropin and unconjugated estriol) and together with the woman’s age, estimate her risk of having a child with Down syndrome. These screening tests are typically offered between fifteen and twenty weeks of gestation.

Screening tests are of limited value and are often performed in conjunction with a detailed sonogram. These tests are only able to accurately detect about sixty percent of fetuses with Down syndrome.